Here is a great example of the fun we can have with the GemVision design system. Bob and his wife Karey were approaching a big anniversary. Karey had recently dislodged her diamond from the setting (no, she didn't lose the stone - thank God). Under the pretense of having the ring repaired, Bob came in to discuss a new setting for his wife. As we talked, he came up with some parameters and ideas. They included these three key elements:

1. Wanted to use the beautiful 1.00 ct marquise diamond they had.
2. Wanted to RE-use the gold in her current ring for sentimental reasons.
3. Wanted to consider incorporating the birthstones of their two daughters.

Bob planned ahead and he brought in the ring so we could get Karey's finger size, (crucial element when planning a surprise!). He left the diamond and the gold ring with us and over the course of the next few days I came up with several different design styles - some using birthstones and some without. I emailed the images to Bob and he narrowed it down to two different styles. Then he brought his daughter Claire in with him and let her have some input as to which style she liked the best and how to arrange the birthstones. Bob and Claire settled on the version you see below. 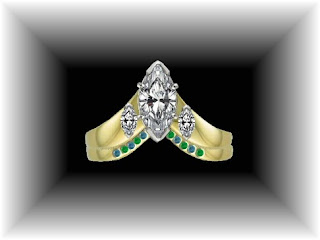 From there I zipped the image over to our associate, Jere Keyes, who has a 3-D CAD CAM system which allows us to turn my two dimensional image into a 3-D image and then it carves out the actual wax model of the ring that we use for casting. We melted Karey's old ring along with a couple grams of new 14kt yellow gold, added two 2x4mm marquise diamonds and a total of ten 1.5mm created gemstones to represent Claire and her sister.

Here is the finished product: 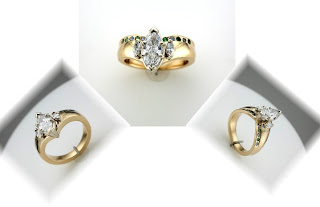 Bob had things planned out and took Karey to a special concert for their anniversary and presented the ring to her that night. Here is part of the email message he sent me early the next morning:

"I wanted to thank you for the time and effort your team put into the design and creation of Karey’s new wedding ring. While I must admit I was a little nervous about getting it on time for our anniversary yesterday, you guys came through! The important part is that Karey loves the ring and was truly surprised. She noticed the original ring and diamond were missing, but assumed I had taken it to get it “fixed”. Again, thanks for the great job."

The reason Bob got a little nervous was because we had some technical problems with our casting equipment, but everything was up and running in time to get the ring out to Bob in plenty of time (he said as he wiped the sweat from his brow!) for the big occasion.

GemVision is a great tool to help you make something special for someone you love - just like Bob and his daughter did for Karey.

Come on in and let us put the power of GemVision to work for you.
Posted by Big Red Dawg at 12:51 PM