As we approach our TENTH ANNIVERSARY in Lowell, Cliff
is waxing nostalgic. The other day he unearthed some old pictures on the computer at home.
We thought we might share them here. 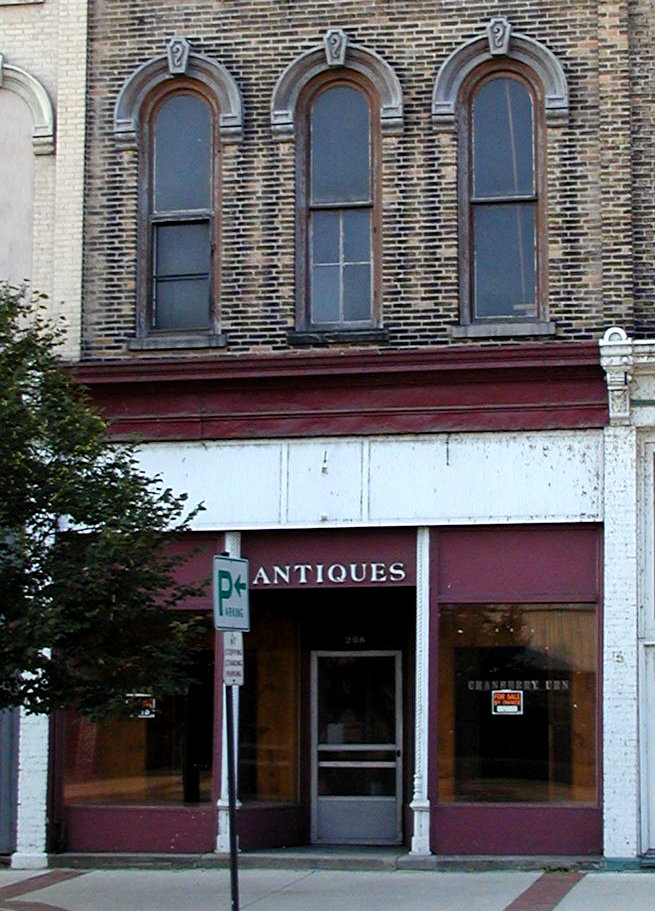 Here is the outside of the building when we bought it in the summer of 2002.
Our initial vision was for hand crafted jewelry along with artwork from
the many talented people in and around Lowell. The building was built in 1868
and was Lowell Dairy/Creamery initially - there are hundreds of broken milk bottles in our
basement - the Lowell Historical Museum has some whole ones.
For 60 years or more before we bought it from Vi Murray, it had been home to
the Cranberry Urn Antiques. We will always be thankful to Vi - when word
got out that the Gilmore Group was putting in a restaurant across the street
(Flat River Grill) she got a few phone calls from interested buyers; a couple of
whom offered her MORE than her asking price. But she had shaken hands with us and even though she did not yet have any money in her hands, she considered the building SOLD.
We probably would not have gone ahead with out plans if it were not for
Liz Baker at the Lowell Area Chamber of Commerce and the late David Davis. Liz was helpful, encouraging and welcoming.
(Julie knew Liz from their younger days of working at the Alto General Store.)
David was one of the founders of the Lowell Area Arts Council - he set up shop
on our second floor to teach painting classes and introduced us to
many of the local artists we featured in our early years. 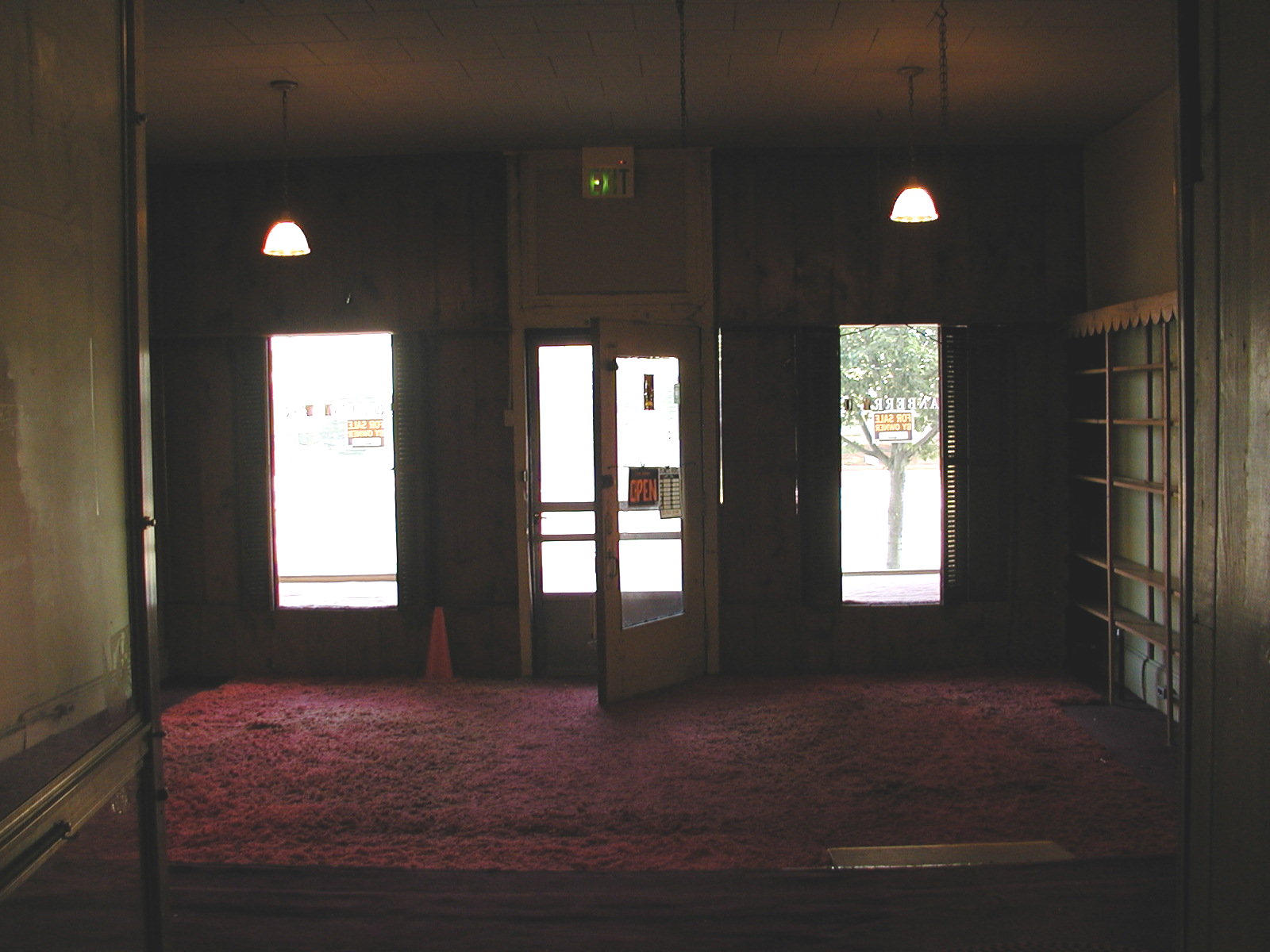 The Cranberry Urn sold antiques and Cranberry glass for decades.
Here is a view looking out - there were TWO suspended ceilings
and boards covering the windows for us to tear off. 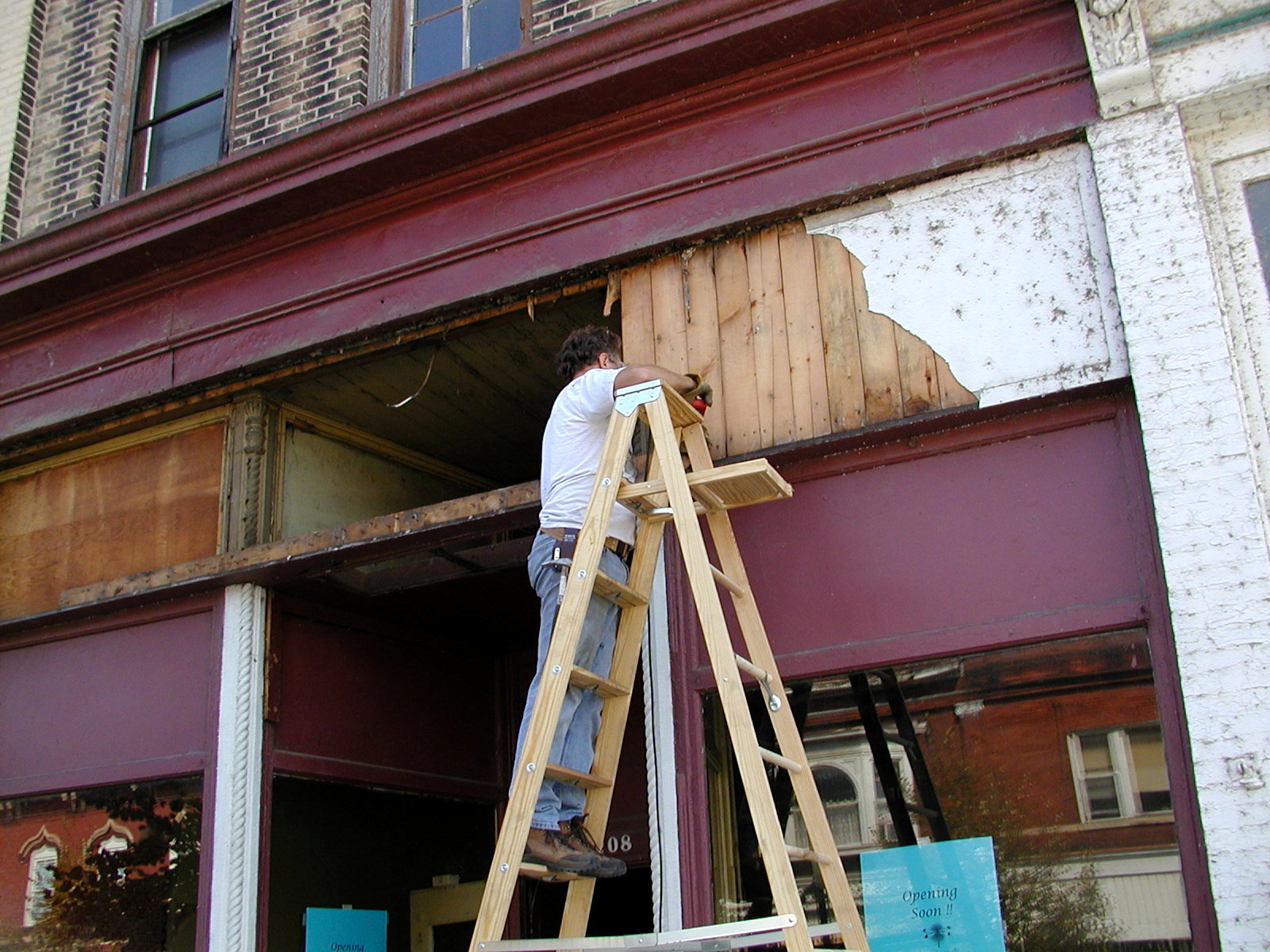 Proof that Cliff works every now and then. Tearing off the layers
on the front of the building to let the light shine on the art work
and jewelry we planned to have in the store.
After our third or fourth trip to the hardware store that used to be across
the street, owner Bob Ford suggested that we just set up a charge account
and pay him at the end of the month!
Gotta love doing business in small towns. 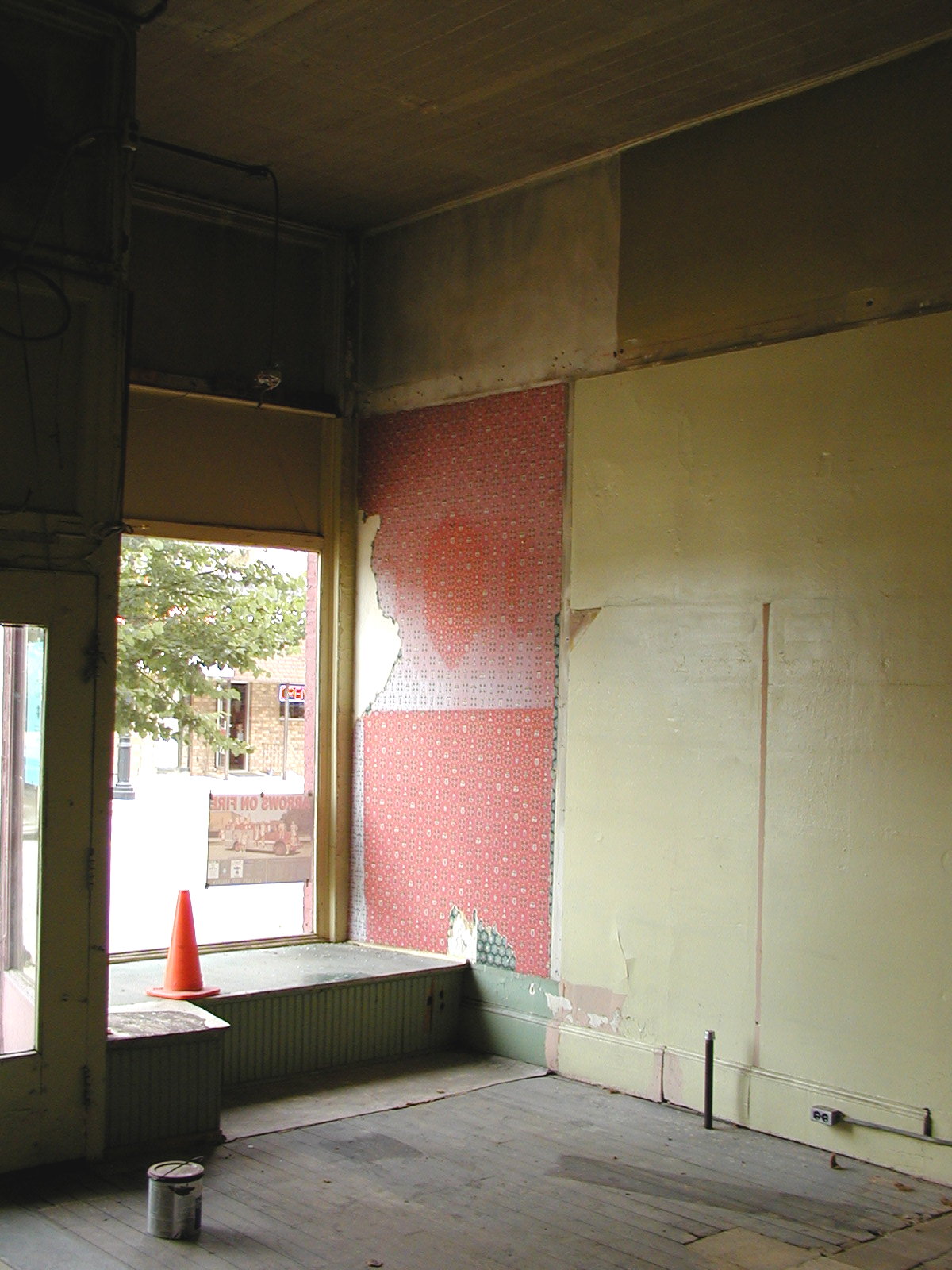 Here is a view looking out AFTER the ceilings were removed. 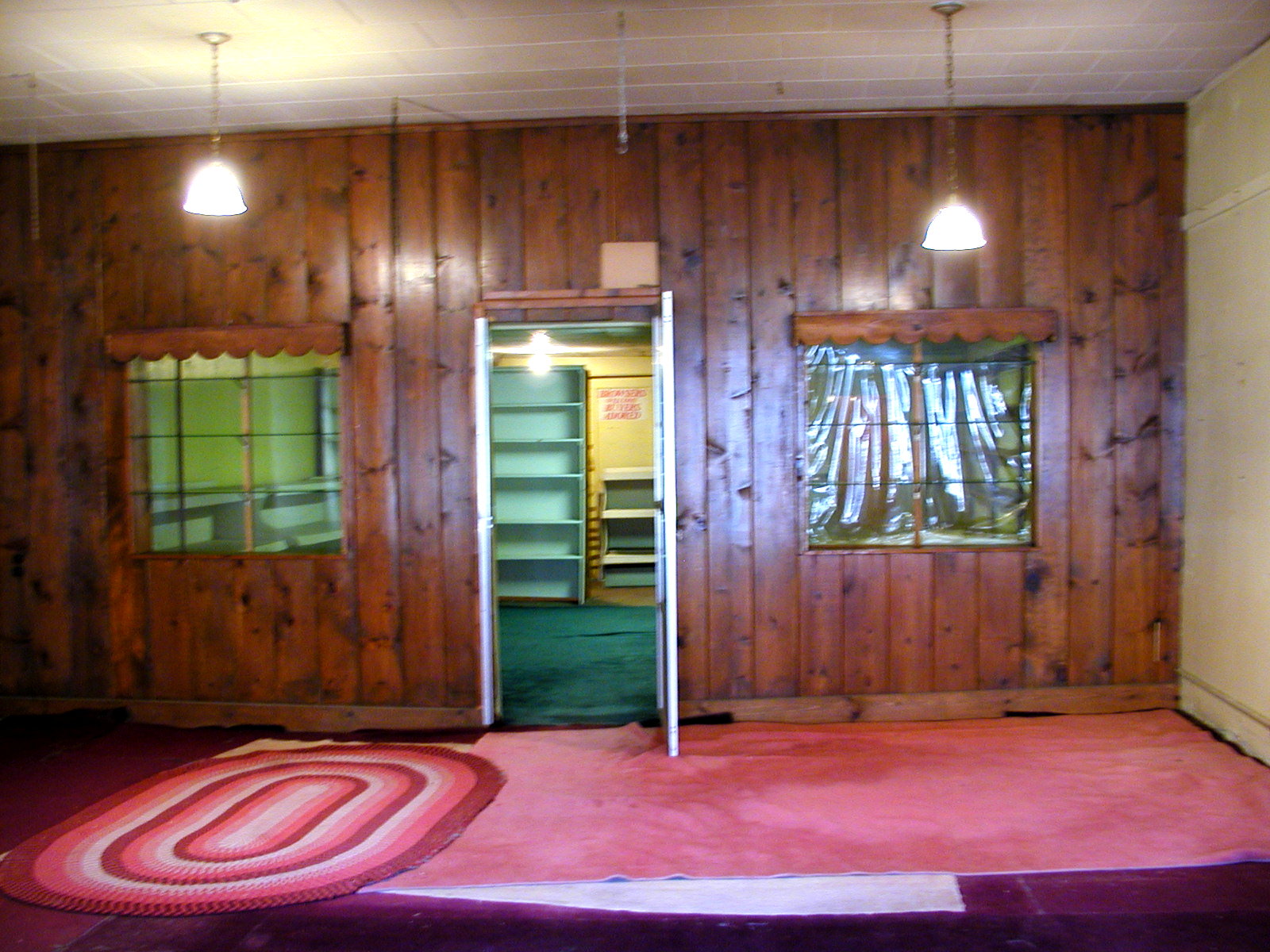 This is the wall that marks the division between our show room
and Julie's work area - and Otter's bed.
Mrs. Murray had layers and layers of carpet and rugs down.
﻿ 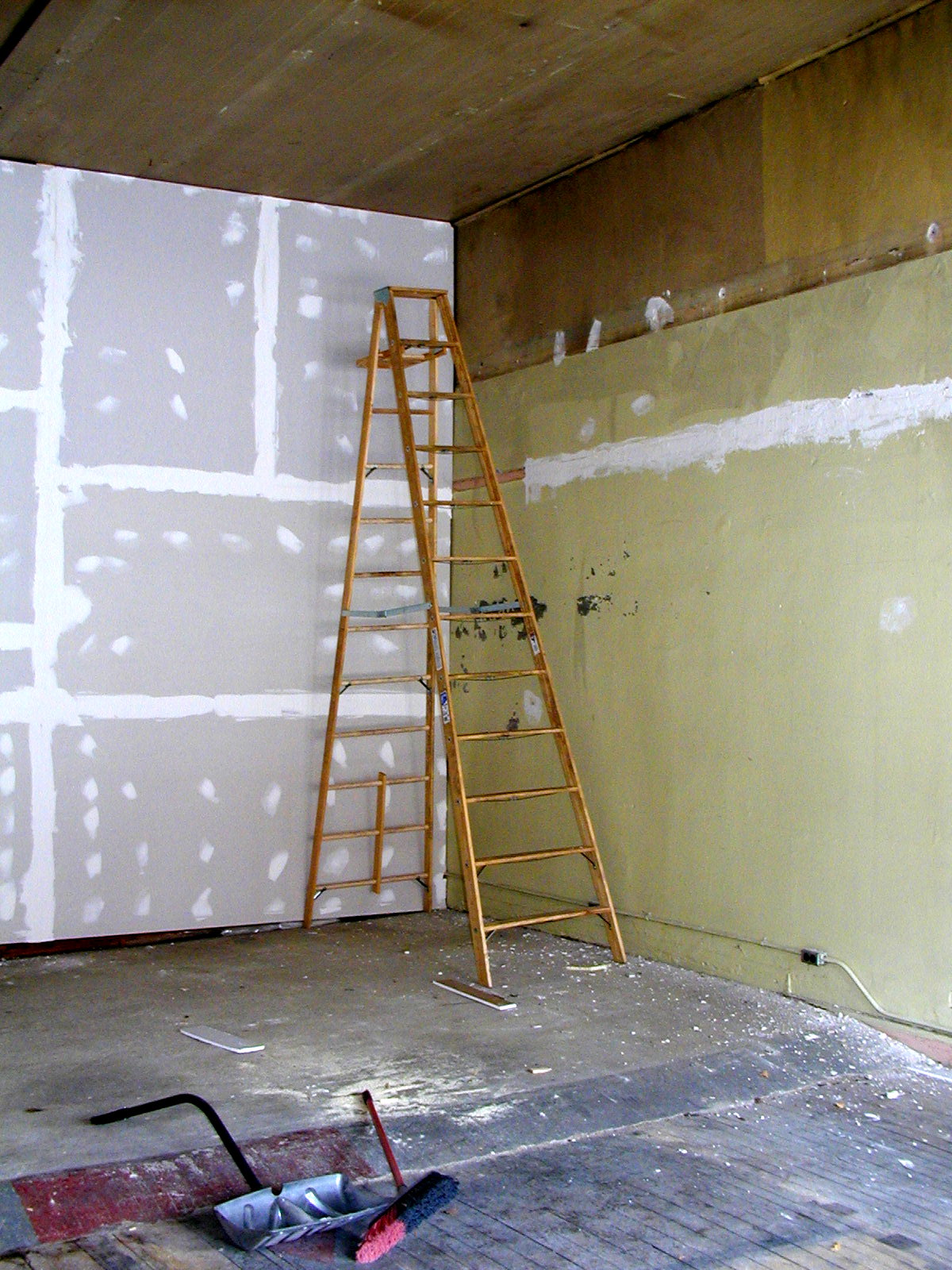 Above is the same wall AFTER Cliff tore out the ceilings and put up some drywall.
Below is the other side after we exposed some brick and primed the remaining plaster. 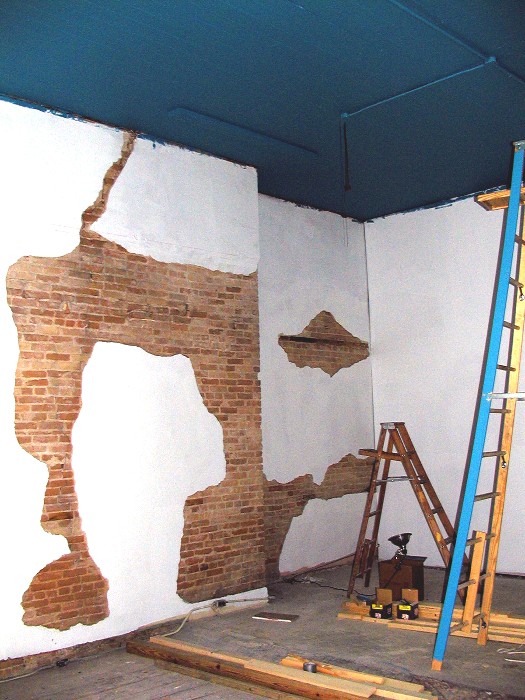 Below is the front of the building with all the new glass installed.
If you look carefully you can see some guys on the floor.....
﻿ 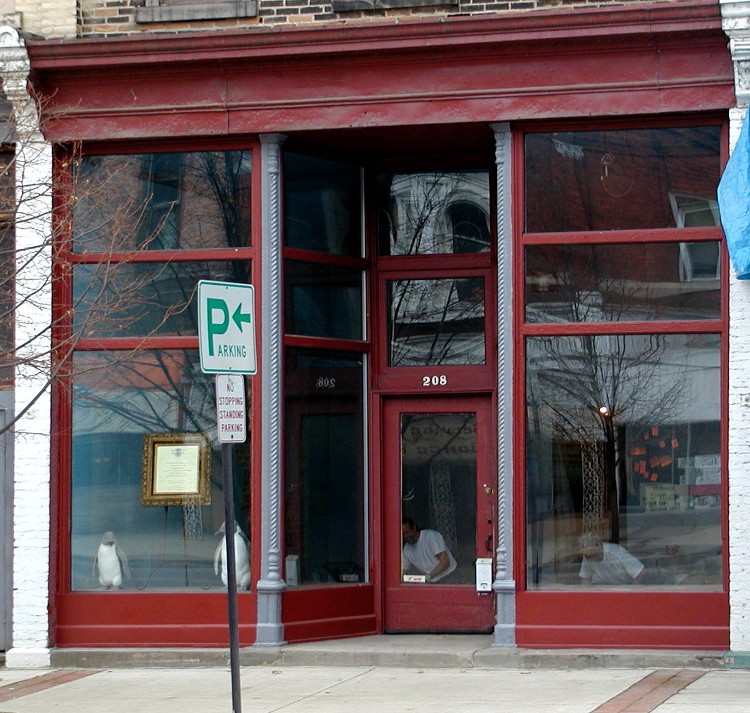 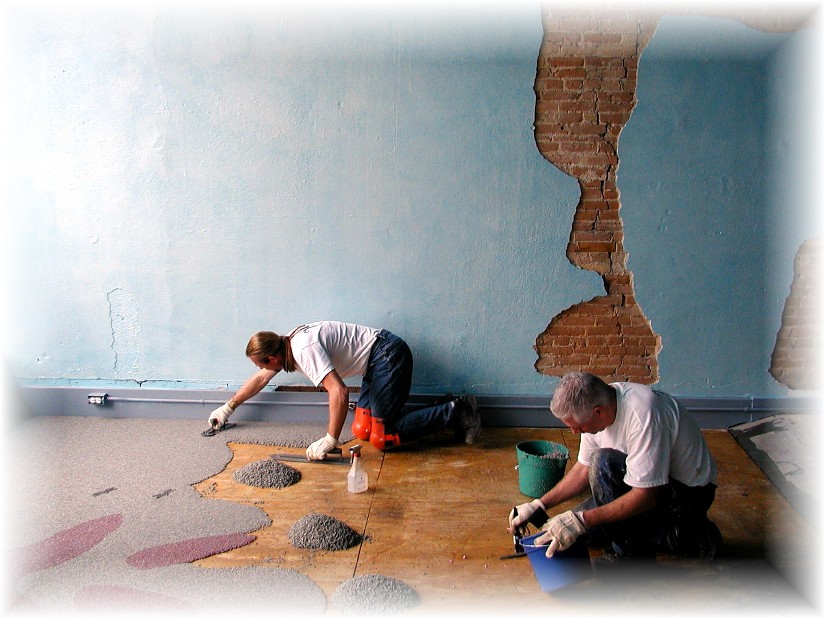 Evert and Jerry put in our Natural Stone Carpet. 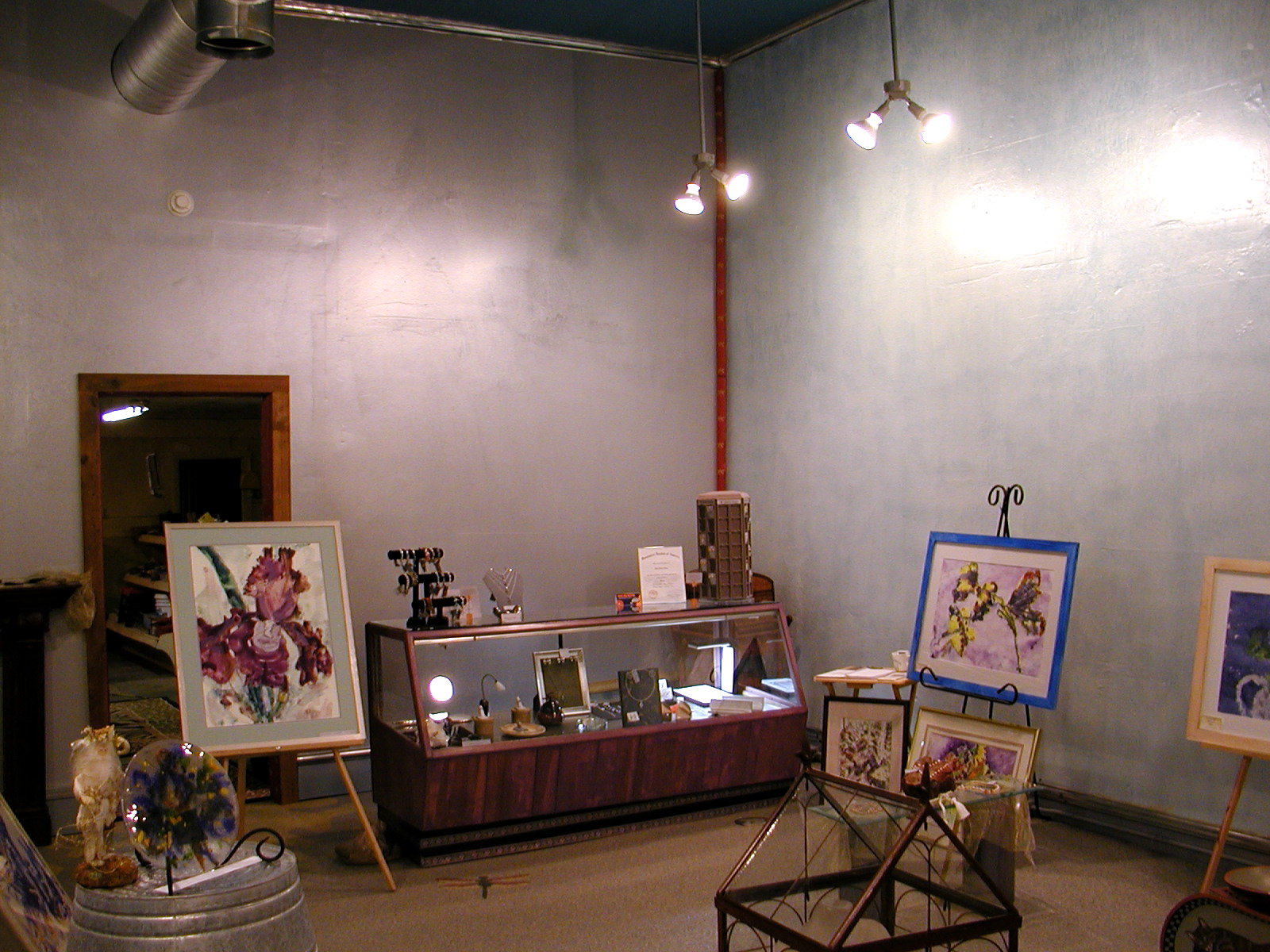 Opening Day on the Friday of Christmas Thru Lowell is captured above.
We scrambled to have SOMETHING ready for the busy week-end.
We had art work on easels around the room and some of Julie's
jewelry in a converted bakery case we bought from Dan and Deb Pipe.
(People think we are joking when we tell them we started
with jewelry in a bakery case!) 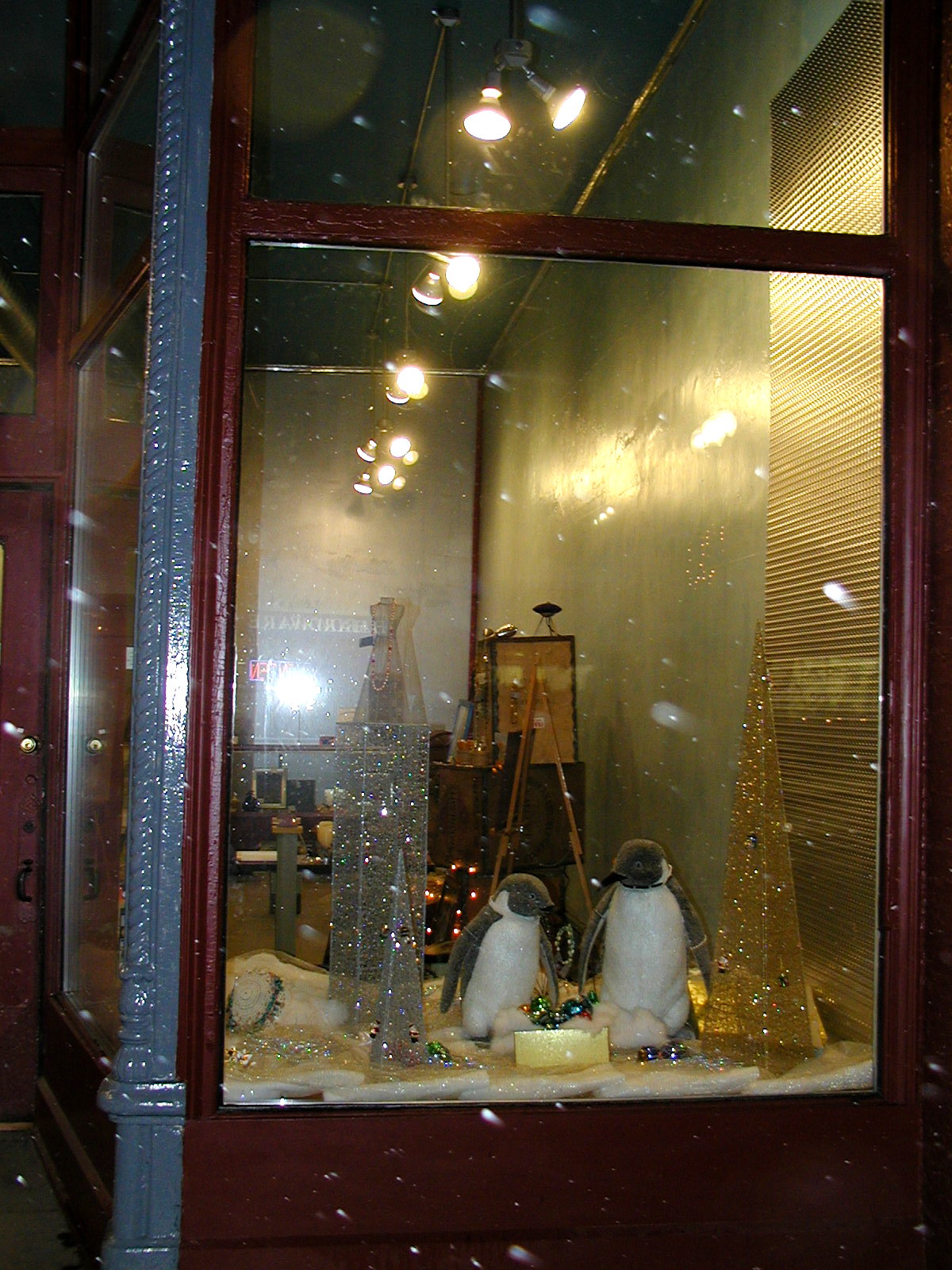 Our first Christmas window - we still have those goofy penguins! 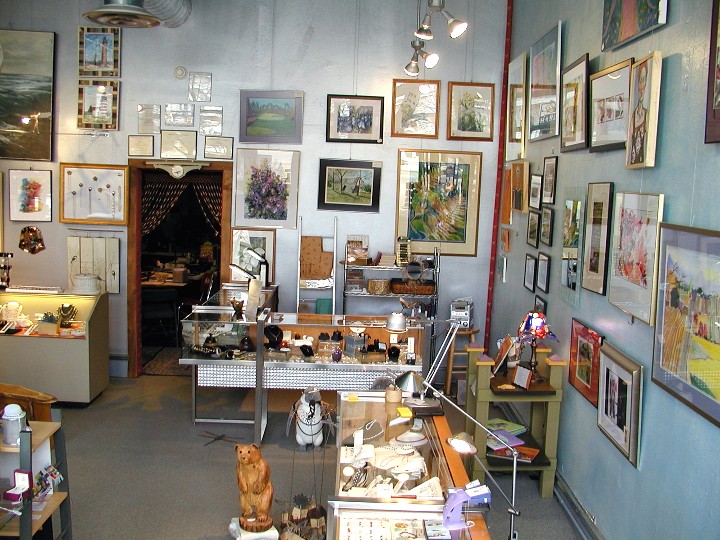 Within a year or so, our showroom was BURSTING with
art and jewelry. We hired two young men and a truck to get the
jewelry cases from the top floor of the Antique Mall (thanks Ron!).
At one time we had work from almost 40 artists.
They out grew us - Susan Molnar opened Glass House Designs.
Then Kathleen Mooney followed with Fire and Water.
Both of them do a MUCH better job than we ever did with presenting
local, regional, and national artists - their galleries are just down the street.
As the artists found new venues, we narrowed our focus to jewelry design and repair. 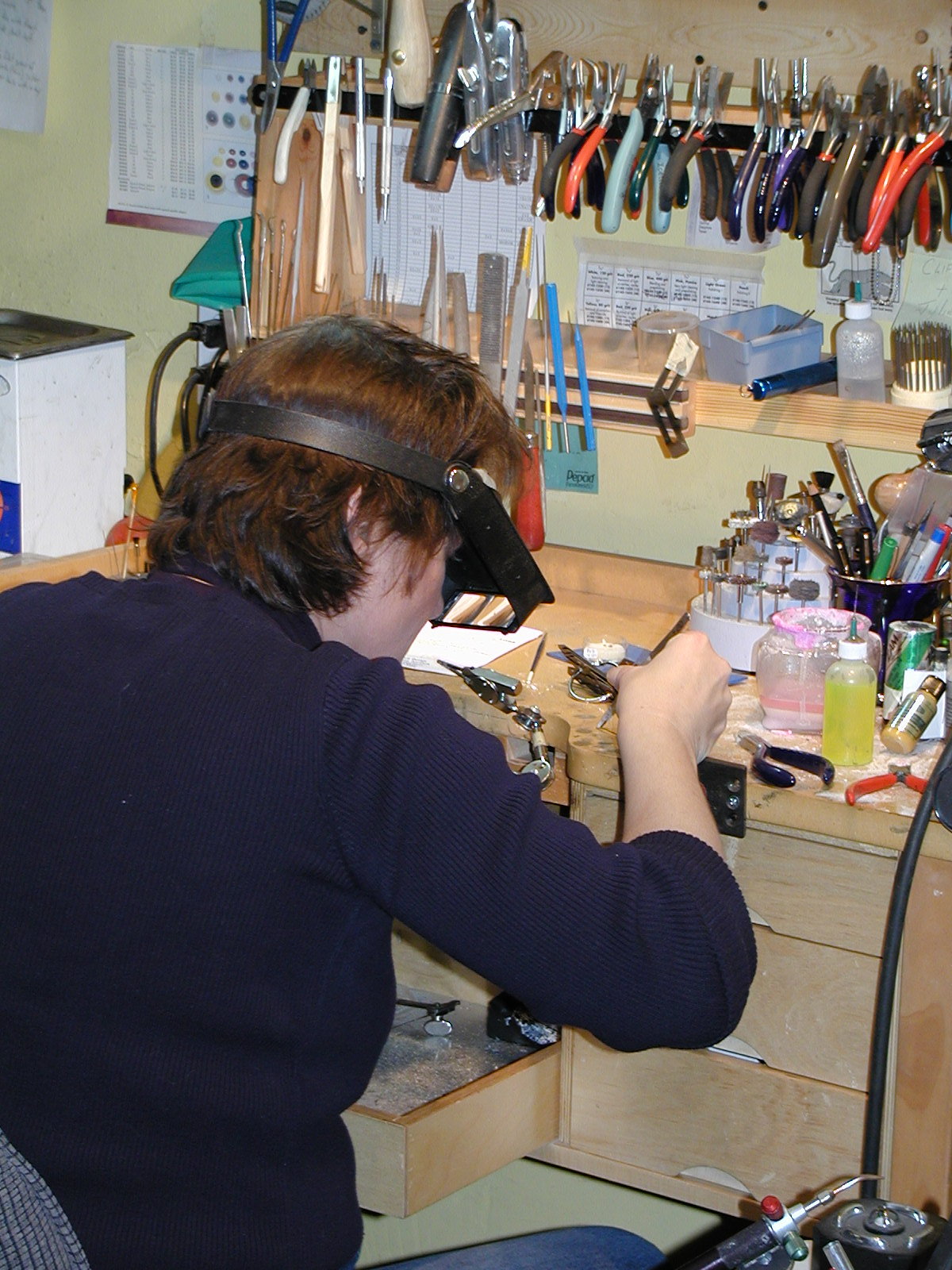 In the meantime, Julie spent hours and hours at her bench -
perfecting her craft with repairs and her own special pieces
of jewelry in karat gold and sterling silver.
(Fun Fact: When we opened gold was less than $300 an ounce
and silver was around $2.95 an ounce. As I write this gold
is $1715.00 and silver is at $32.15.)
﻿
Posted by Big Red Dawg at 2:12 PM