The Pink Arrow Project was born in 2008 when the football players at Lowell High School agreed to wear pink jerseys for a game in an effort to raise money to help local families in their fight with cancer. Every person and family who has fought cancer has a story and the Pink Arrow Project helps broadcast the stories.

Coach Noel Dean and the rest of the Pink Arrow crew had NO IDEA that the community of Lowell would grab the concept and run for the goal line! Lowell area families have been helped by the thousands of dollars raised each year through the sale of Pink Arrow t-shirts and a host of other activities in Lowell and at the special Pink Arrow football game.

Chimera Design has collaborated with Pink Arrow Pride and the Michigan-based Collegiate Bead Company (the founder, Dave Schowalter, has a story of his own - see below) to offer the Pink Arrow Bead this year. 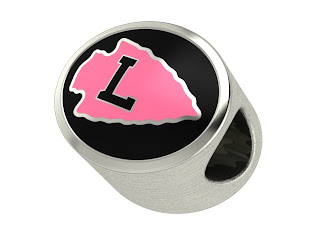 This is the top view of the Pink Arrow bead. 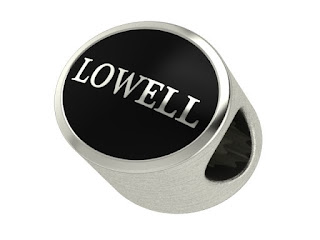 The back has "Lowell" in sterling with your choice of
black enamel (above) or pink enamel (below) background. 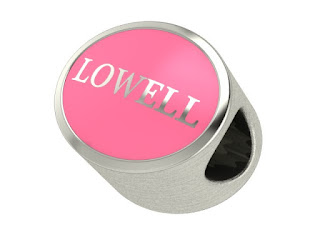 The Pink Arrow beads are NOW available at Chimera Design for $59.00. Designed AND manufactured in MICHIGAN this sterling silver and enamel bead will fit bracelets from Pandora, Reflections, Zable, Troll, and every other major manufacturer.

DON'T HAVE OR WANT A BRACELET - No problem, the Pink Arrow Bead looks great around your neck on a silver chain or a piece of leather.

GUYS - wear it around your neck on a chain.

All of the proceeds go directly to The Pink Arrow Fund.

A Perfect Partner for Pink Arrow


The Pink Arrow Pride bead is made for us in Michigan by Collegiate Bead. In fact Dave Schowalter, the man behind Collegiate Beads, has his own story to tell. Schowalter owns a jewelry store in Royal Oak and he was diagnosed with a brain tumor in 2008. Dave is a positive thinker and he is convinced that if he wasn’t at home recovering from the surgery, then he never would have had the time to conceive and execute his plans for making college and sorority beads to Pandora and other popular bracelets.

He was committed to keeping the jobs in the US (Michigan) even though he realizes that it has probably cost him hundreds of thousands in revenue. Looking on the bright side of that equation, he thinks his “Made in The USA” philosophy might have opened the doors to many of the colleges who authorized him to make beads with their logo on it.

Schowalter doesn’t gloss over the pain of his operation and recovery. There were times, he says, when it was acute. There are also no guarantees his tumor won’t return. But the incident was a life-changer in an overwhelmingly positive way, he says. It gave him the opportunity to review his perspective and connect at a new level with his family. He has a new found appreciation that nothing, including life and the bad times, lasts forever. “There are opportunities everywhere. Good can come of the most trying situations,” he says.

The Pink Arrow bead was designed and manufactured in Royal Oak and Grand Rapids, Michigan.
Posted by Big Red Dawg at 1:59 PM