Guys, Matt recently set the bar pretty high when it comes to providing a surprising and romantic proposal for his fiance Nicole. Matt and Nicole live in Chicago, but Matt's mom persuaded him to shop at our store when he and Nicole were looking for wedding rings last fall (thanks Susan!). They came in together and we went over diamonds and possible ring designs (they both passed the rigorous Chimera Diamond Course with flying colors). We got a good idea of what Nicole liked and her ring size and they went on their way.

Matt was already laying the ground work for his surprise back then. He made a point of letting me know in front of Nicole that the time for a ring was probably in a year. Very open ended.
Once he got back to Chicago, Matt went to work. He started emailing me and we worked up some CAD designs and ordered in a couple of diamonds for him to consider. His mom came in the store and looked over some diamonds while we talked with Matt on the phone. We chose a center stone and began to construct the ring from the CAD design we settled on.

At the same time the ring was being made, Matt made some plans with a friend of Nicole's who lives in San Francisco. He and Nicole were going out there on a vacation, but Matt had a little more in mind. He told her that he wanted to propose to Nicole on a beach and she helped set that up. A few days before they headed to California Matt was in Michigan on business and picked up the ring. Nicole was under the impression that a ring was something that would happen in the future.

Near the end of their vacation Matt and Nicole hiked over a mile and a half to this beach, where Matt dropped to his knee and presented Nicole with the ring he designed for her and asked her to be his bride. She was "completely surprised" according to her email - oh yeah, she said YES. 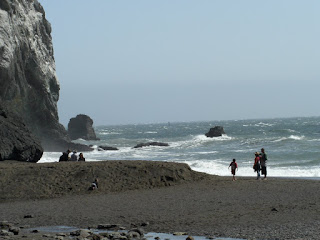 My hat is off to Matt - there is no way I could have kept the ring and a deluxe proposal on the beach plan a secret. What a great surprise to pull on such a lovely young lady - Way to go, Matt!I heard a rumor that Nicole's friend took some pictures of the actual proposal - but she is currently out of the country on business so we must wait patiently for those pictures.

Here is a picture of Matt and Nicole when they returned to Chicago. You can see some shiny diamonds and gold on her left hand if you take a look! 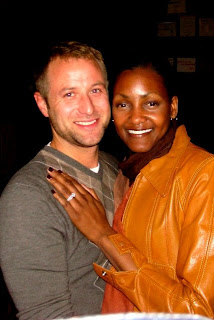