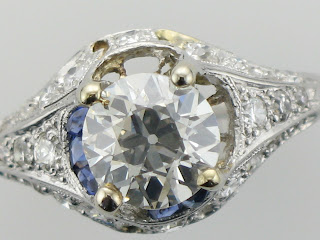 Laura and her parents came in with the ring in
the picture above. It was made of platinum and
set with a lovely Old Mine or European cut diamond
accented by sapphires and diamonds.
As you can see, some of the platinum had worn and
the ring was losing gemstones.
The ring had been made for them by an old family friend who
had since passed away and it had temendous sentimental value -
Laura's mom wanted Laura to have it.
They wanted to know if we could remake the ring in white gold. 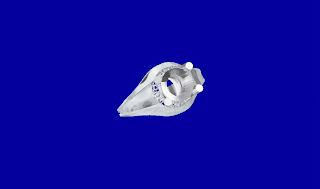 Yes we can! The above image is just one of a series of
computer images produced by the CAD program as
we orchestrated the re-build. 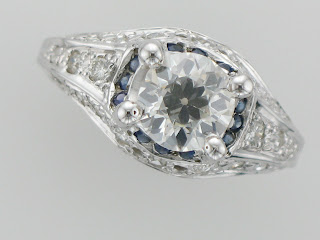 Voila! Here is the finished piece in 14kt white gold.
The only difference was that we had to use modern,
diamond cut round sapphires to replace the ones that were left.
(The original sapphires were cut by hand and somewhat irregular
which made matching them impossible.)
We also made the gallery area which hold the sapphires slightly thicker
so that the ring should be a thing of beauty for years and years -
for Laura's daughter to wear when she is old enough.