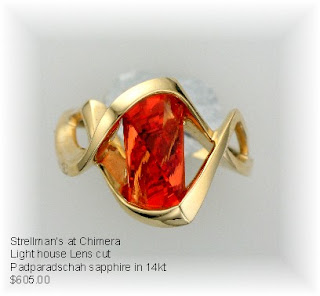 Strellman's jewelry is just flat out cool. Mr. Strellman invented the Lighthouse Lens cut for gemstones that you see in these two rings. They sold so well at his store in Oregon that he started offering them to other independent jewelers and his unique, contemporary designs worked their way across the country.

Strellman's are availabe is a wide variety of colors - most of which are lab grown sapphires that carry a lifetime guarantee against chipping or cracking.
FYI - Strellman's does stand behind their warranty. In the summer of 2007 one of our customers was in a car accident. He had was slammed into the door, cracking the gemstone and actually bending her Strellman ring. The lighthouse lens gem was replaced at no charge - just like they promised. 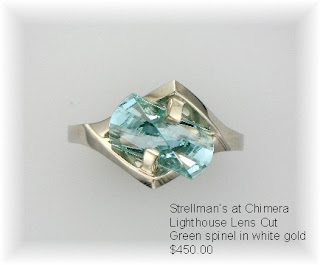 Email ThisBlogThis!Share to TwitterShare to FacebookShare to Pinterest
Labels: Stellman's jewelry at Chimera.